The Lopinot clan was released from the hospital this afternoon. The drive home wasn’t as tough as I imagined it would be. I had heard stories from a few friends who drove with extreme caution, rarely touching the speed limit. Instead, I just zipped along as an almost-normal pace.

Once home, we introduced Oliver to Molly. That relationship has been a fun one to observe develop. So far, Oliver has screamed his little head off and scared the bejeezus out of Molly. In turn, Molly has barked at Oliver on several occasions.

Among the highlights of the first day home:


I’m sure there will be more exciting things to report on in the coming days. Below is a picture of Sarah, Oliver and me right before we left the hospital and a photo of Oliver meeting Molly. 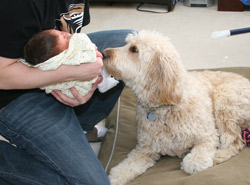 3 thoughts on “Home is where the dog is”

The author of Blog Full of Letters is Justin Lopinot, a communications guy with a fun little family life going for him. To reach Justin, send an e-mail to jlopinot [at] gmail [dot] com.