Oliver met his first lady-friend yesterday. You may recall that my good friend Mike and his wife had a daughter about two and half weeks before we had our son. Mary Kate and Oliver are now about the same size, though Mary acts much more mature, plus she smiles a lot (Oliver is just starting to smile, though I haven’t been able to capture one on film).

It was cool seeing the two of them together, but they’re babies, so they didn’t really interact. It will be even cooler to see how their friendship evolves over the years. Oliver should be a certified ladies man by the time he’s a teenager — all of my friends who are pregnant are having girls, and all the ones who had babies during the past year had girls (except Jen and her son Drew). Here’s a picture of cute little Mary Kate, followed by the babies with their moms and another that looks like the two are singing in unison (in that picture, Mary Kate was crying and Oliver was yawning). Enjoy: 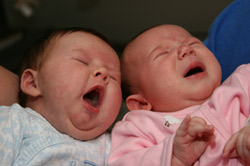 1 thought on “Oliver and his first lady-friend”

The author of Blog Full of Letters is Justin Lopinot, a communications guy with a fun little family life going for him. To reach Justin, send an e-mail to jlopinot [at] gmail [dot] com.